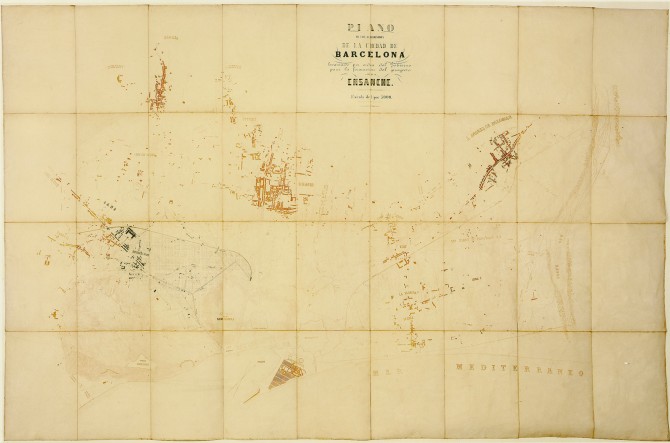 Printed on 36 sheets of 32 by 44.7 cm sheets and presented in a folder with the printed title: “Plan of Barcelona and neighbouring towns”. 1:5000 scale.

In 1859, the City Hall organised a municipal competition of projects of the “Eixample”. To do so, it printed some examples of the “Pla de Rodalies” (plan of the surrounding areas), on which the competitors drew the “Eixample” (expansion). This competition immediately lost all relevance since the central government had just approved the “Cerdà plan”.

These circumstances explain the rarity and lack of awareness of a document of such big dimensions but with such a short lifespan.

The peculiarity of this example relates to the fact that a drawing of the area between the Montjuic hill, the old precincts and the railway line to Martorell appears on the printed text. We do not yet know the drawing’s artist. In any event, it was a person who was highly interested in the construction of “Eixample”. Cerdà himself?

“If the drawing of the urban layout was undertaken with any practical end, it is possible that the most interested party would have been the Council of Sants” (Ramon Grau)