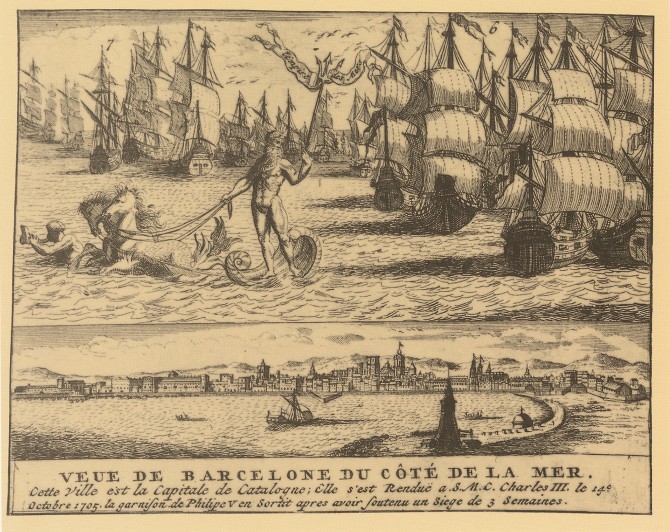 The King Charles III in Barcelona. The sheet with the allegorical engraving of the taking of Barcelona in 1705 announced the triumph of the Archduke’s cause in Catalonia, acknowledging the person he considered as his legitimate sovereign. 1705 was a key year during the War of Succession. In August 1705 the allied forces – composed mainly of English and Dutch troops- which supported the candidature of the Archduke Charles of Austria to the Spanish throne disembarked and besieged the city of Barcelona. During the month of September they conquered Montjuïc fortress in a battle during which Prince George of Darmstad lost his life; and finally, on October 9th the city capitulated. The archduke entered the city, swore on the Catalonian constitution and was proclaimed king with the name of Charles III.

Represented elements. This engraving stands apart owing to its intentionally unbalanced composition. Presiding over the image is a bust of the king Charles III within a palm leaf border. A box in the upper right side – where a fleet guided by Neptune and a view of Barcelona’s sea copied from previous models is shown – detracts from the main axis of the composition presided by the effigy of the king. In the foreground the main personalities that directed the allies military forces are shown on foot and horseback, among then Lord Peterborough and Prince George of Darmstad (who, in fact, had died before the city’s capitulation). They are identified with a small inscription. The fortifications that appear in the background are invented and have nothing to do with the city of Barcelona. By indicating certain dates the engraving seeks to represent the exit of the bourbon troops from the city. Another smaller box at the bottom represents what is titled » the defeat of envy and pride».

Allegorical elements. The artist of the engraving, Daniel de la Feuille (1640-1709), was a well-known cartographer. Of French origin, he fled during the persecution of the Huguenots and established himself in Amsterdam, where he produced the greater part of his works. Besides his engravings, De la Feuille is known for his work dedicated to creation of insignia, emblems, hieroglyphics and modern and ancient allegorical figures. Consequently, the presence of these elements in the engraving, common during the baroque period, is not strange.