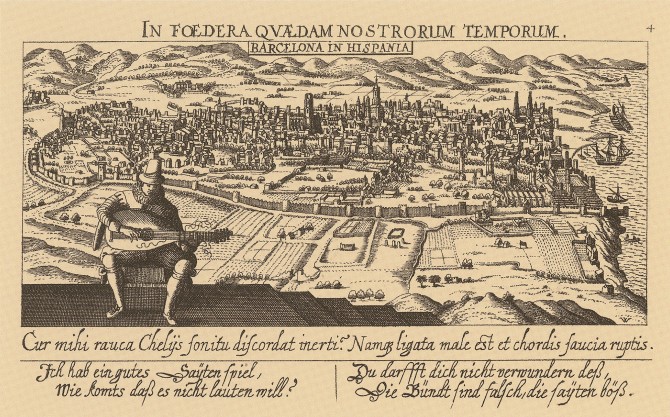 Repetition of the model. The image is a good example that illustrates how the engraving of Barcelona published in the Civitates Orbis Terrarum is converted into a model of the view of the port city that will be repeated. The work dates from the first third of the 17th century and although it was redrawn did not incorporate any of the new elements of the urban renewal later carried out. We still see the Barcelona close to the medieval times as appeared in the artist’s 1535 drawing. However, despite the drawing’s obvious lack of precision with regards to the original, the viewpoint is closer to the urban layout which allows us to approach some of the more visible and significant elements.

Dockyards and belltowers. In the foreground, a person in period dress is playing a lute, one of Europe’s most popular instruments since the beginning of the 16th century, centrering the close up of the city, which is well defined by the unfinished medieval walls along the maritime façade. The contrast between the Rabal of rustic fields which include one of the biggest gothic buildings in the city, the royal dockyards, devoted to the construction of ships since the 13th century, and the remainder of the urban layout situated behind the wall of the Ramblas is undoubtedly the most outstanding feature of this view of Barcelona seen from Montjuïc. As visual references the following stand out; the bell tower of the church of Pi, the towers of the Cathedral, but not very clearly, the towers of Saint Catalina’s 13th century Dominican monastery, – replaced now by the market of the same name – and, in the area of Borne, the twin towers of Saint Mary of the Sea.

The boats. The drawing reduced the number of boats that distinguished the “Civitates Orbis” drawing, limiting itself to three of the most common of the time, a small Mediterranean boat, a sailing boat, and in the background a galley, the most used rowing boat in the Mediterranean since ancient times.