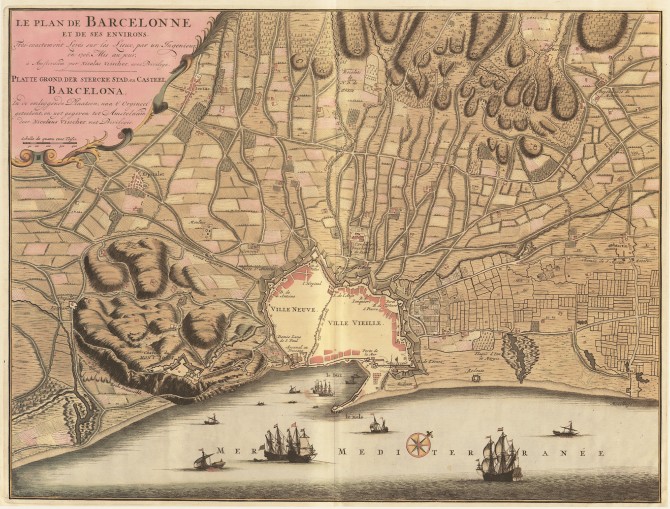 The plain of Barcelona. Interest in this plan does not focus on the strict represenation of the city but on the immediate area outside the walls; what is known as the plain of Barcelona. Within the defensive perimeter of the well drawn and delimited city only the wall of the Rambla is represented, separating what was called the » New Town» that is to say Raval, from the «Old Town «, corresponding to the city of the medieval era. The houses closest to the walls can be made out. On the other hand, the plain of Barcelona appears in great detail. The network of roads such as those to France and Llobregat especially stand out, as does the respresentation of the water network, with Rec Comtal irrigation network, stream, torrents, mines (such as that of Jesus) and the marshes of the lagoon or Montjuïc marina. The engraving also inlcudes the population nuclei of the outskirts of Barcelona like Hospitalet and Sarrià, certain buildings (convents, chapels and windmills) and even an indication of the layout of the agricultural allotments that are more obvious in the irrigation area of Sant Marti de Provensals. Thanks to this level of detail, the plan has become one of the best descriptive tools of the occupation of the city’s territory at beginning of the 18th century.

Some details underline the interest in showing strategic points. The way of describing the sea side access to the mountain of Montjuïc as «inaccessible rocks » demonstrates quite eloquently this point.

In 1705 Barcelona was besieged by the Austrian forces -among, which there was a relevant presence of Flemish soldiers – until the city capitulated and the Archduke Charles III entered as king. Months later the troops captained by the son of Louis, Luis Alejandro de Borbón, besieged the city in 1706, withdrawing before the arrival of the British navy.