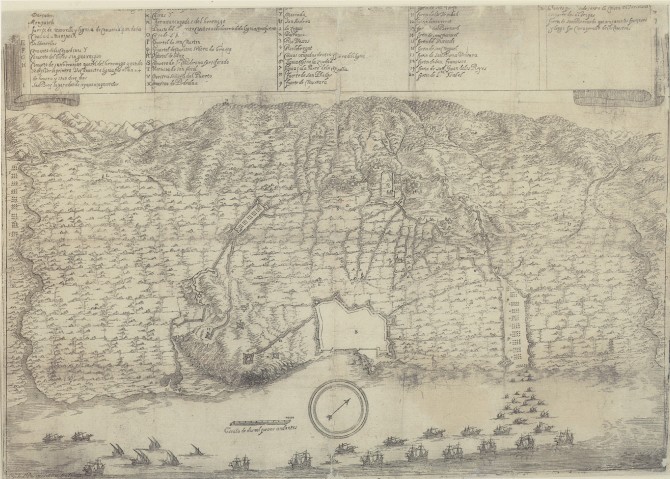 The longest siege during the history of the city. The siege of Barcelona by the Hispanic troops commanded by John Joseph of Austria and Francisco de Orozco (Marquis of Montara) lasted from July 1651 to October 1652. At 543 days it was the longest siege that the city endured. The Guerra dels Segadors or Reapers’ War ended with the capitulation of Barcelona in 1652, and the Principality of Catalonia reverted to the Spanish crown. The signing of the Treaty of the Pyrenees (1659) definitively closed the conflict between Philip IV and the French kingdom, which annexed the counties of Roussillon and Sardinia.

Position of the troops on the plain. The main interest of this engraving resides in the fact that it shows the entire plain of Barcelona, from Llobregat to Besós, with indications of the positions of the troops and the fortifications that were erected during the siege. Geographical features appear as well as the barracks, forts, convents and hermitages around the city. It contrasts the wish to localise the different strategic points of the plain – shown more accurately than in the engraving of the contemporary Giovanni Antonio Franco (cfr. n. 24) – with the representation of the city that appears simply delimited by its walls. Not even the line of the perimeter is precise or real especially concerning the Raval wall and the line of the port.

The account of the siege. This remarkable engraving shows the vision of the siege from the point of view of the Hispanic army. The Franco Catalonian positions are the «enemy» and the inscription on the map enables us to follow some strategic points that changed sides during the siege, such as the Sant Bertrán fort in the Montjuïc marina. The lexicon used in the inscription appears to show that the artist could come from Italy, and so accompanied John Joseph of Austria when he passed through Italian lands on the way to capitain Philip IV’s troops in Catalonia.