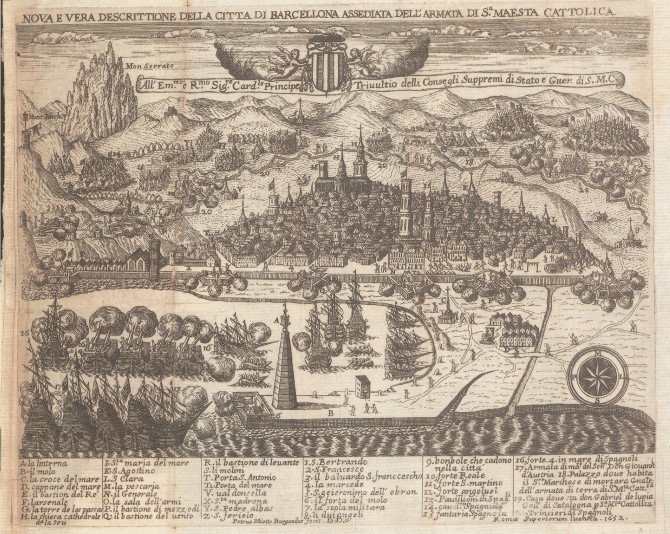 The Hispanic army in front of Barcelona. Unlike the bird’s eye views showing the plain of Barcelona and the layout of troups during the 1651-1652 siege (cfr. N. 25 i 34), this engraving by Pierre Miotte recuperates one of the most usual pespectives of the representation of the city: the view from the sea. The city is again drawn in perspective, and, in the foreground, we can see the port and the Hispanic navy’s fleet of boats. The details of the sea front with the sea barracks, the exit of the Rec Comtal (irrigation canal) and especially the sea wall and its bastions really stand out. Within the city the artist identifies special elements such as the dockyards, the General’s buildingand the Santa María del Mar Cathedral. Further details can be appreciated, such as the city’s gallows in the lower part of the Ribera. The drawing imitates quite well the diagram and some of the representations of Boisseau’s 1645 engraving (cfr. n. 19), including the surprising incorporation of the Montserrat mountain.

The army. Although not in the foreground, the engraving also locates and draws the different forces of the castillian army and the fortifications that were raised around the city during the first moments of the siege. Army quarters and encampments where the Spanish cavalry and infantry can be made out, including the command posts of the marquis of Mortara who directed the troups with John Joseph of Austria.

War scenes. The level of detail of the drawing permits the recreation of the scenes of the siege, although the representation looks more like that of a general battle. All the artillery, both that of the attacker, either by land or sea, and that of the defence, are firing and the inscription indicates the bombs falling on the city. This was not at all the dynamic of the siege which was more characterised by skirmishes in the area of the plain of Barcelona than by a direct attack on the city. Without doubt, the engraving’s artist, of Italian origin like the other artists who drew episodes of the siege of the city from the Hispanic side, intended to praise the military actions of his catholic majesty Philip IV and the Italian troops that participated in the siege.