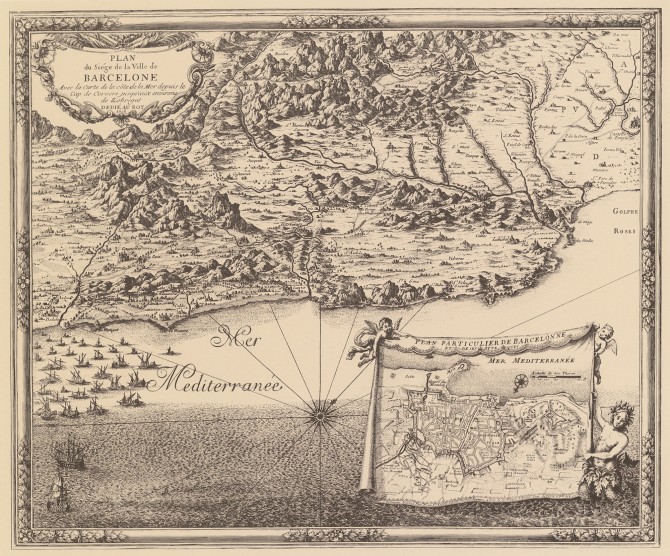 The production of loose sheets from Beaulieu’s work. This big engraving of the 1697 siege of Barcelona published by Reine Michèle de Beaulieu is made up of several plates that later served to produce partial loose engravings. Some of these plates were acquired by the King’s Cabinet and are currently conserved in the Louvre museum. There is evidence that from 1727 onwards, Louis XV had engravings from this collection printed as a present from the crown.

The framing of the engraving. The strange framing of this sheet is due to the fact that it is only part of the big engraving of the siege published in 1698. The border that contains the full title of the engraving, which in the overall works is centred, here appears in the upper right hand side. The text has not changed (we reiterate that it is the same plate) although it is obvious that the drawing does not show the Catalonian coast from Cape Cervera to Llobregat, but is only shown from the river Besós to Sant Pere Pescador. What does appear in its entirety, which is without doubt the most interesting element of the engraving, is the canvas held by two angels and a triton on which the plan of Barcelona is drawn, with indications of the siege attacks.

A southern facing city. The layout of the city that appears in the drawing breaks with the traditional view of Barcelona. Instead of orientating the plan facing north, in which the beach should appear at the bottom, the artist changes the view. This change in the diagram from the traditional cartographic representation of the city has one obviously intentional explanation: show Barcelona as it was perceived by the Duke of Vendôme’s troops during the siege. This also permits a view in the foreground of the trenches that were dug to attack the city through Portal Nou.

Despite the orientation of the plan, the city and its surroundings are shown in great detail. The inside road system can be seen, as can the Rambla wall and all the defence bastions. Some particular buildings are named, and where there is not enough space, are identified with a number on the edge of the canvas. The Montjuïc castle is shown as a ground plan, with at its feet, the lines of defence and «the enemies» encampments.