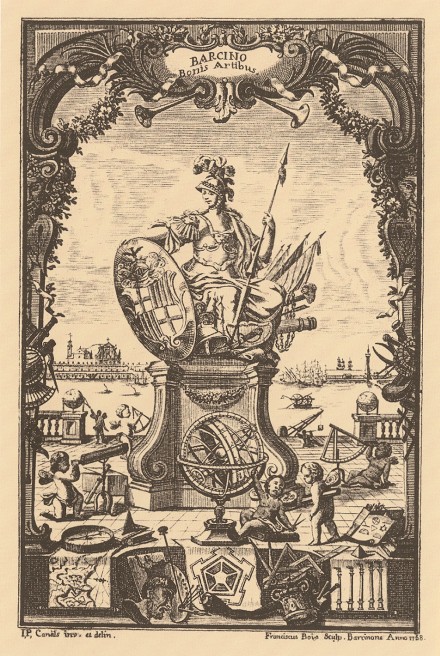 Barcelona, arts and sciences. The image represents the economic surge of Barcelona in the middle of the 18th Century in the wake of the development of the commercial and industrial activity. The city appears in the background, represented by the new sector of Barceloneta and the lighthouse in the port; the new urban landscape introduced by the military engineers.

Allegorical elements symbolizing a compendium of scientific, technical and artistic knowledge of the time appear in the foreground surrounding the goddess Minerva who is holding a shield of Barcelona. According to the inscription at the top, the city, owing to its good qualities, is in favour of the development of arts and sciences as corresponds to a society undergoing full economic progress.

Teaching of mathematics. The image, so rich in contents, was published in the treaty of the professor Thomas Cerda who taught mathematics at the Colegio Noble Cordelles school, which belonged to the Jesuit order. The college started working at the end of the 16th Century and after 1714 filled the vacuum that arose owing to the suppression of the University of Barcelona. Mathematics tuition was highly sought after amongst the city’s social elite in the 1700s.

J.P. Canals knew how to represent the allegories of the different arts and sciences through the symbols that distinguished them in the 18th century: architecture with the compass, the set square and the ruler, but especially through the layout of the military fortress and geometric figures. It is accompanied by the other fine arts, painting and sculpture. Knowledge of astronomy is demonstrated by the astrolabe as a model of the celestial globe, and sextants, precision instruments that lead back to a representation of the world through cartography. The view to the left of the image has been interpreted as representing Barcelona’s commercial trade, a fact reinforced by the vision of the port that frames the view of the city.