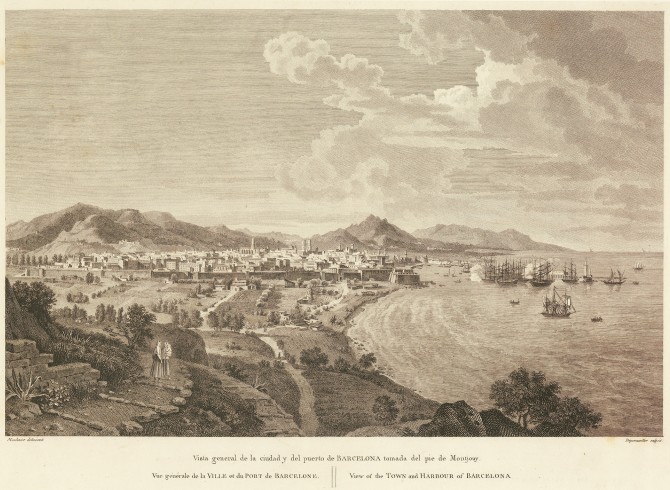 The renewal of Barcelona’s urban image. At the beginning of the 19th Century, a new cycle of images of Barcelona was inaugurated providing new views of the city, for the first time going into greater detail in the interior, especially by representing the most emblematic public spaces. These views appear in the publications that are known as picturesque journeys, undertaken by illustrious, romantic, foreign travellers, who travelled around Spain motivated by the desire to get to know the country and to transmit their vision of the different geographical areas that they visited.

Laborde’s contribution. This description coincides with the profile of Alexandre de Laborde, a learned and cultivated traveller who roamed around Spain, between 1798 and 1806, with a team of twenty artists amongst whom the draughtsmen Jacques Moulinier and François Ligier stand out. With regards to Barcelona, he published within his work a series of images that are doubly important: nearly all of them were unpublished until that time and they became the most repeated visual stereotypes during the decades following their publication. As one of the most notable Barcelona historians, Agustí Duran i Sanpere said: “we can consider Laborde’s set of drawings to be the most successful Atlas of the city at the beginning of the 1800s.

The new view from Montjuïc. First of all, the draughtsmen who accompanied Laborde provided an overview of the city taken from Montjuïc. The view shares with those made during the previous centuries the composition of a foreground in which the observer is situated, a middle ground devoted to the Huertas de San Bertrán – or San Bertán vegetable patches – and then, the city behind the walls, attention being drawn towards the port and enclosed by a final mountain panorama. However, unlike the previous images, the foreground is clearly emphasised, greatly landscaped, in the taste of the époque, while the city, on the other hand, loses prominence, to become to a certain extent, a landscaped background of Montjuïc. A more subjective vision therefore imposes itself, in which the artist’s interpretation comes to the fore. However, the most relevant point concerning Laborde’s representation of the city is that it will replace the famous view from the sea so often repeated in previous centuries and becomes the generalised view of Barcelona from then on. Different artists will leave their imprint in the treatment of the scenery in the foreground.