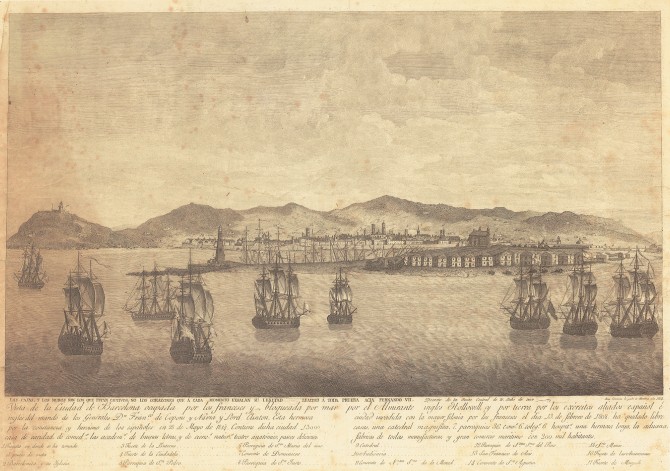 The new profile of the city’s maritime front. This engraving from the beginning of the 19th century recovers one of the most represented perspectives of the city: the view from the sea. In this case, the great novelty is the relevance of the new district of the Barceloneta, constructed from 1753 onwards, in the foreground. Although the Barceloneta had already appeared in a 1779 engraving by José Baxeras (nº 238) this can be considered to be the first view where the district is really shown in some detail, as demonstrated by the uniform height of its storied buildings, the grid layout of its streets, and Sant Miquel temple. The rest of the city is far off in the background and shows little perspective, so only buildings such as the Royal Docks that are close to the coast are identifiable.

The Napoleonic Barcelona. The engraving represents the city of Barcelona during the French occupation at the time of the War of the French (1808-1814). Despite the exalted patriotic and anti-French tone of the inscription and the British flag of the fleet that appears off the coast, the image of the city represented in the engraving contains no heroic narrative or glorious event. The 13 February 1808, the Napoleonic troops commanded by General Duhesme entered Barcelona with over 5000 men and around 2000 horses. Although, in theory, they were supposedly only passing through on the way to Cadiz, on 29 February they occupied the Ciutadella and Montjuïc Castle. Thus was initiated a surprise invasion that spread throughout the peninsula and which finished one month later with the abdication of Charles IV and Napoleon’s coronation of his brother Joseph as the new king of Spain. In the case of Catalonia, the occupation went further since the Principality was incorporated into the French empire between 1812 and 1814.

The anti-French activism of the engraver Josep Coromina. Josep Coromina i Ferralt (1756-1843) was a Barcelona engraver who stood out for his burin engraving technique. During the French operation, Coromina supported the royal cause of Fernando VII through his engraving works, such as for example, various models of patriotic rosettes with the King’s portrait. The same year as the return of the «Deseado» (1814), Josep Coromina asked the Junta de Comercio for a loan to undertake a series of engravings that described the insurrection of Catalonia against Napoleon. The series’ name was Hechos memorables en Cataluña durant la ùltima Guerra de la Independencia (Memorable events in Catalonia during the last War of Independence) and it was composed of 8 works carried out between 1814 and 1822. The first of these engravings is precisely the view of French-occupied Barcelona. Other artists such as Antoni Rodriguez, Bonaventura Pianella and Salvador Mayol participated in the remainder of the engravings, – among which we see events such as the resistance of the Arboç villa, the Battle of Bruc or the occupation of the Ciutadella.