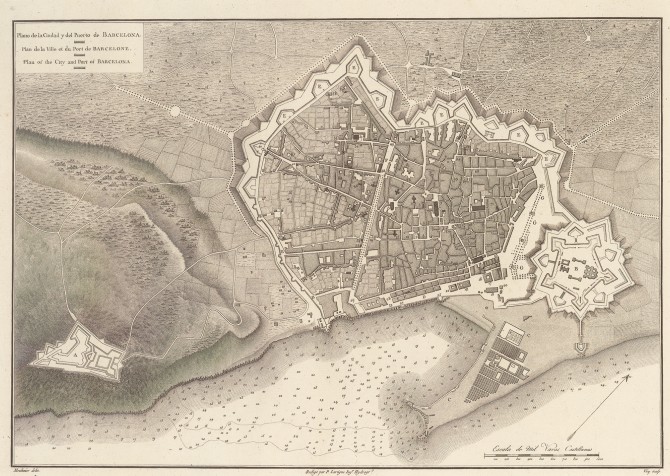 Neoclassic urbanisation. Alongside the repertory of the views of Barcelona included in the works of Laborde, the layout of the city provides information of an urban nature that allows the identification of the different places shown in the details. The comparison with the plan drawn up by Ponz twenty years before (fact sheets nº 243-244) is inevitable, both owing to their closeness in time and in the similarity of the type of work, both journeys throughout Spain. However, if Ponz’s work bears witness to the city prior to the illustrated civic remodelling, Laborde’s layout not only shows this fact but also highlights the subtleties of the new neoclassic urbanisation.

Regularity of geometric road layout. The most important point here is the regularised treatment given to the modern roads, either those have been renovated or those of new construction. This is the case of the Santa Mónica rambla, that due to the demolition of medieval walls, and following the 1772 project of the military engineer Pedro Martín Cermeño, was converted into a straight, tree-lined boulevard prepared for carriage traffic. The by-passes that connected to the main roads that criss-cross the plan of Barcelona such as the Madrid road that entered into the urban interior through the Portal de San Antonio, or San Antonio Gate in Rabal were also lined with trees. The importance of the avenues is represented firstly by the location of the double row of trees to distinguish them from the other roads which are tracks, and by the connection roundabouts or those situated halfway down them. A clearly French style of urbanisation which is clearly expressed in the lineal layout of the Paseo de la Explanada, built in 1797.

New streets in Rabal. The city’s density is revealed through the opening of new streets in the area of Rabal. Urban land remains the protagonist of this urban sector, but the Nou de la Rambla street, open since 1785 was the starting point for the transformation of Rabal into a residential and industrial area. Laborde’s plan shows the urban effect of this new road axis that concentrates building and allows the opening of secondary roads.

Finally, the drawing incorporates bathymetric information concerning the port, which has lead to assumptions that the artist had access to Spanish Navy sources of information.