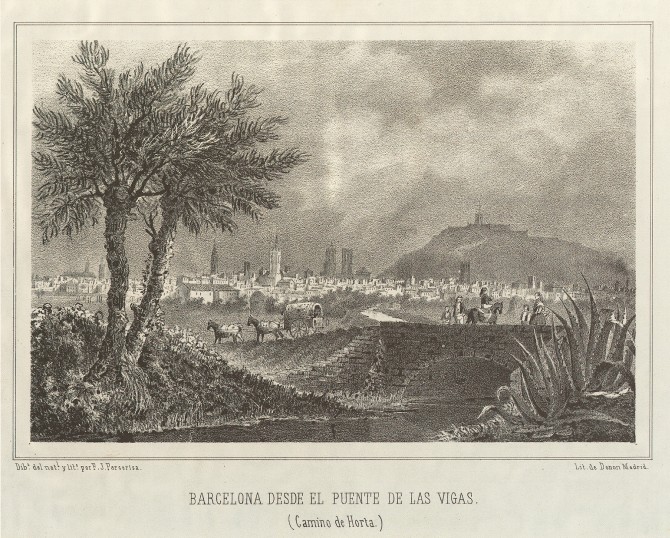 The Rec and the Vigas Bridge. This lithography, drawn from nature by Francesc Xavier Parcerisa, shows us a viewpoint of Barcelona that had not been undertaken until then. It is a view from the plain towards the city, taken from the crossroads of the flood course of the road to Horta and Rec Comtal, where the «Puente de las Vigas» was located. The Horta flood course was the track that leaving Portal Nou going northwards linked the city to this old municipality. The flood course was, in fact, the confluence of various torrents that descended from Collserola towards the plain (Delemús, Ligalbé, Deslinde among others) and which, when directed towards this track, avoided a proliferation of bridges over the Rec and prevented this from collecting the rain water. That explains the importance of the Puente de las Vigas as a strategic crossing over the Rec. Its location would, currently, correspond to the Sicilia Road between Casp and Gran Via.

Souvenirs and beauties of Spain. Francesc Xavier Parcerisa (1803-1876) was the manufacturer of the country’s first big edition of the country to be illustrated with lithographies, Recuerdos y bellezas de España, started in 1839 with a volume dedicated to Catalonia. The work, in the style of picturesque voyages, wanted to present the reader with architectural elements and monumental spaces from the past, with a new romantic vision of history. In total, in the 11 published tomes, Parcerisa managed to do lithographies of over 600 drawings taken from nature.

The plan and the city in the background. The present lithography appears in the first tome of Recuerdos y bellezas de España, accompanying texts by Pa Piferrer. Its the only picture from the tome which does not represent any concrete monument but is a description that serves to head the chapter dedicated to the city of Barcelona. Although Parcerisa is outstanding owing to the details of the monuments he represented and in his romantic vision of his environment, the drawings of the landscapes are not so successful. In this case, both the human figures and especially the trees that are used to frame the image are too limited. As concerns the city, there is no excessive desire to be realistic either, unlike for the monuments. For example, the outline of the walled perimeter that should appear from this viewpoint is not perceptible either. In addition, the mountain of Montjuïc is too big. Overall, the singularity of the viewpoint chosen to represent the city should be appraised since it breaks with the traditional and practically unanimous view from the sea front.