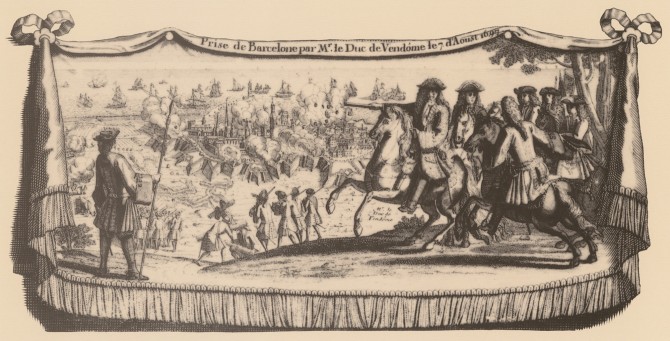 Graphic account. The images of this french almanac from 1698 seek to provide a graphic account of the most important events of the previous year. The top half of the print is dedicated to the wedding between the Duke of Burgundy, Louis of France –grandson of Louis XIV- and the Princess María Adelaide of Savoy that had just taken place in December 1697. The finely and precisely drawn main part of the engraving shows us various members of the court and the French royal family, identifiable from the inscription. Among them we can observe the brother of the Duke of Burgundy, the young Duke of Anjou, the future Bourbon Philip V.

News of the war. Half of the engraving contains various scenes, the majority of which refer to the victories of Louis XIV’s army, and also the peace treaty of Ryswick that put an end to the Nine Years’ War. The most highlighted image is indeed that of the signing of the treaty. Among the victories of the glorious French army there are small medallions dedicated to the taking of Cartagena de Indias, the defeat of the Spanish army in Catalonia and the conquest of the Ath fortress by the united provinces – now Belgium – following a siege directed by Vauban.

The taking of Barcelona. The taking of Barcelona in August 1697 occupies the lower box of the almanac. Framed by drapery it represents a scene of the siege and attack against the city, directed by the Duke of Vendôme. The Duke appears in the foreground on a rampant horse. The city can be seen in the background, viewed from the mountain and shown in very little detail. The scene particularly highlights the bombs falling on the city. Next to the walls the lines of the trenches dug to attack the city between the Portal Nou and the Portal de Jonqueres can be seen. In the sea, the fleet of boats that participated in the siege can be seen.