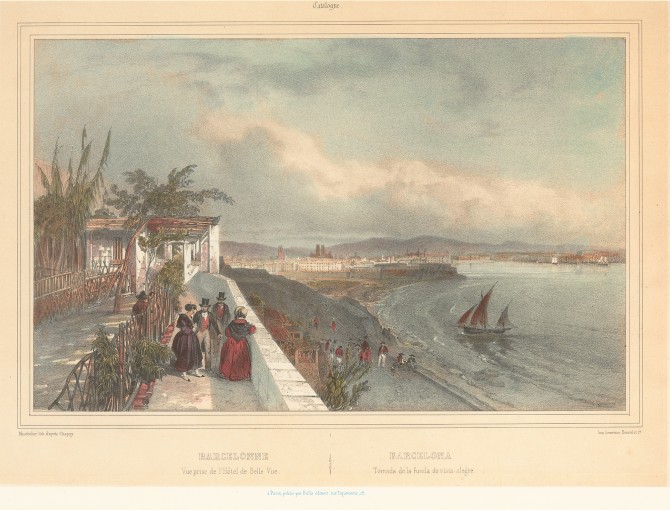 The «boom» of picturesque tours. From 1840 onwards, the concept of picturesque tours around Spain was popularised as demonstrated by a notable editorial production of illustrated albums and guides undertaken by French artists that was quickly emulated by local production. The priorities of these foreign travellers were oriental architecture, cities from the south of the peninsula and the folklore, which explains why the views of Barcelona were incorporated into these travel publications that covered different places in Spain.

A privileged urban tour. Among the albums in which views of Barcelona appear, that of the draughtsman Nicolas-Marie-Joseph Chapuy stands out with a series of different lithographies undertaken between 1840 and 1842. Before the deployment of urban photography, these pictures were fantastic documents that allow us to appreciate the city’s public spaces, especially the most representative walks and squares.

Chapuy draws an urban tour from the maritime parade, shown as usual from Montjuïc, situated in front of the Barceloneta where the Sea Gate is located and enters into the city by the Pla de Palau with a drawing that clearly compliments that of Alexandre de Laborde of the beginning of the 19th century. (nº 364). The artist offers another view of the not yet built Pla de Palau that enriches the visual knowledge of the Barcelona of the time, another of the Passeig de la Duana, also known as the «Prado Catalán», with the statue of Neptune in the foreground, and situated next to the customs office, a work of the sculptor Joan Enrich of the end of the 19th century that symbolises maritime trade.

The lower end of the Rambla. Chapuy’s series is the one which best captures the Rambla close to the port, the area known as the Pla de les Comèdies. That is the name of the square that opens in front of the Santa Creu theatre, the oldest in the town and which has been working since the middle of the 16th century. The façade that can be seen on the left hand side of the corresponds to the theatre building that was constructed at the end of the 18th century, before the refurbishment of 1848 that converted it into the Teatre Principal. On the right, the Font de Vell of 1819 stands out.