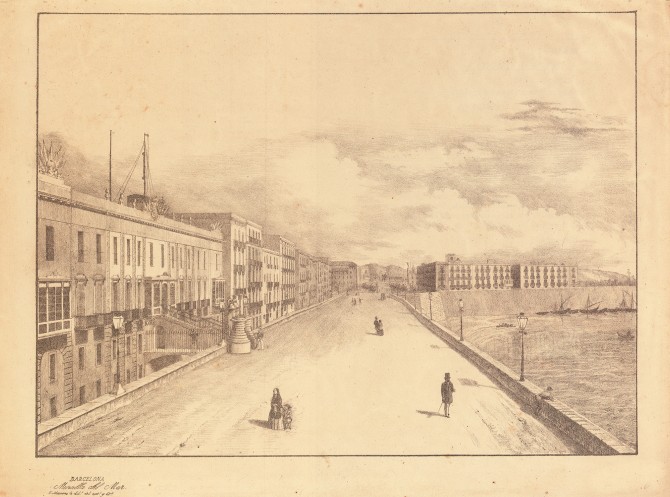 Urban image and visual amusements. This is undoubtedly a peculiar view of this much painted urban itinerary that includes the Paseo de la Muralla de Mar. The front side of the lithography represents the promenade by day and the reverse side, with the inverted image, the same space as a night vision. At the time, this type of reproduction received the name of optical views, visual amusements which to be seen correctly needed an apparatus called a polyrama panoptique that permitted modification of the lighting of the piece according to the impression that was going to be viewed, that is to say, more light for the day view and less for the night one.

These visual games from urban images were very popular with 19th century European society and the painter and professor of perspective Onofre Alsamora was very sensitive to this fashion. Ever since his stay as a pupil in the Escuela de Lonja, or corn market school, he opted for representing the spaces that identified bourgeois Barcelona, beginning by Pla de Palau, then followed by the Rambla and the Liceo. His production identifies him to be the artist that best captured the Barcelona atmosphere in the romantic age.

Urban lighting in the Paseo de Mar. In this picture Alsamora emphasises with a well-composed perspective the generous width of the Paseo de la Muralla with its platform raised to a higher level with regards to the buildings that formed the line of the maritime façade. In the foreground is the construction that had originally been the Convento de la Merced, or Convent of Mercy, built at the beginning of the 17th century, but which owing to the expropriation was rebuilt from 1845 to be adapted to military use, it is currently the Captaincy General.

On the other side to the buildings are the public street lamps which, at the time of the image, had been converted into gaslights. Barcelona was the first city in Spain to use gas for public street lighting.

In the background, the houses of Xifré can be made out on the right as well as the buildings of the adjoining plots and, closing the view, the grouping of the Citadela.