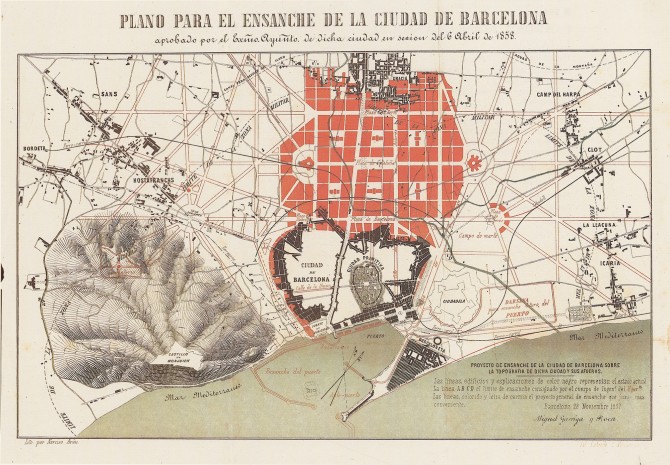 Before the approval of the Eixample. Without doubt, the most intense debate concerning the modernisation of Barcelona in the 19th century centres on its growth. The citizens unanimously called for a radical change in its urban status to eliminate the position as a military strong point it had held since the 18th century; walls were pulled down consequently allowing urban growth onto the area of the plain. Barcelona was at that time too small a city for the high number of inhabitants that lived there and for its aspirations to be an expanding industrial capital.

At the end of 1858 a Royal Order meant that the dossier to authorise the enlargement of the city was passed over from the War Ministry to the Ministry of Public Works and that the military limit in effect until then on not being able to build for a certain period of time on land next to the perimeter of the old city was lifted. This did not however prevent the presentation of proposals for the extension of the city from arising throughout the first half of the 19th century.

The proposal of the architect Garriga i Roca. In 1857, just after the fall of Bienio progresista (1854 to 1856), the Barcelona Council resumed the works on the extension and commissioned its municipal architects to undertake a preliminary study. After certain difficulties between the participating technicians, the municipality approved in April 1858 one of the four versions presented by Miquel Garriga i Roca. This version was published along with the report that accompanied the preliminary study.

Garriga’s proposal was still based on a limited extension between the old city and the populated area of Gracia (drawn in red), with an envisaged dock in the area of Poble Nou. The new stretch is made up of rectangular blocks linked by three main squares and other spaces directly related to different sectors of the stretch. The streets, as Garriga explained in his project report, are of different widths reaching up to 50 metres in the boulevards and main arteries. The role of the circular open squares at each end of the wide artery from which a good number of the main roads that would cross the plain of Barcelona in different directions and that form new junctions and crossroads, such as Plaça del Besòs or la Plaça de Creu Cobierta, is worth highlighting.

The base map that Garriga y Roca used to create his “widening” was the topographic one by Cerdà in 1855 that some years later would be used again for the municipal call for tender for the enlargement projects in 1859. Garriga’s proposal, although not very ambitious as regards its size, is interesting to compare with the Ildefons Cerdà proposal for the widening, especially, in the existing coincidence in some of the roads and junctions envisaged in the new structure to occupy the Plain of Barcelona (nº 598).