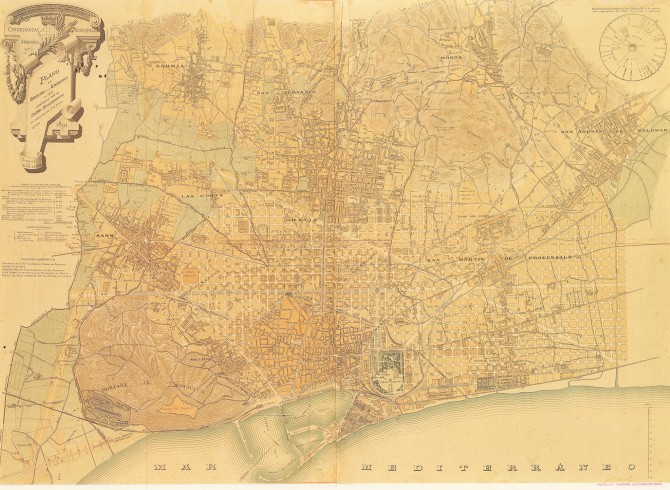 The reform of the ordinances. In 1891, Barcelona undertook an important reform of the city’s construction ordinances. The new approved text replaced that in effect since 1857 and adapted to the new reality of the Eixample, legalising new building heights and volumes that would have been unthinkable in the old city. In this manner, the municipal administration sanctioned the creation of a new architectural landscape, using façades that were richly decorated with sculptured elements, galleries and finishing touches at the top.

The publication of the ordinances was accompanied by a new set of highly precise official plans of the city. In total, three sets of maps on different scales; that of Barcelona and its surroundings, those of the municipality (nº 656) and the interior reform of the old city (nº 657). These synthesise well the city’s urbanisation years before the annexation of the municipalities in 1897.

The plan of the outskirts. It is of indisputable interest and allows a fairly detailed study of the state of the city and the plain since it goes as far as the foothills of the Collserola sierra. It shows not only the extension of the Eixample – with a clear indication of the constructed part and those islands still to be built upon – but also the development of the still independent municipalities of Barcelona’s plain, such as Sant Andréu, Gracia and Sants among others. It also shows the creation of the communications hub of the Plaça de les Glòries, scored with railway lines and the implantation of new facilities such as the Montjuïc cemetery, the abattoir, close to the future Plaça d’España and the Model prison. The municipal limits of the different towns as well as the railways, roads and tramways had just added to the complex structure of this first metropolitan city.

Finally, and significantly, the treatment the plan gives to the foothills of the sierra of Collserola that are closest to the city should be considered; for example, that of the so called Muntanya Pelada, in the zone of Guinardó, which, during the first decades of the 20th century became of area of high residential growth and one of the biggest municipal parks.