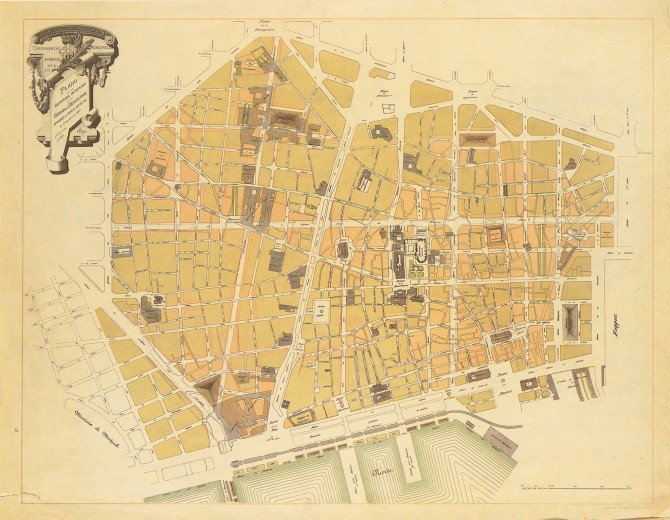 The reconstruction of the old city. This plan is part of the cartographic collection that was published at the time of the new building laws in 1891, alongside the map of the outskirts of Barcelona and the city’s municipal limits (nºs 655 and 656). Unlike these last two, it deals with the interior reconstruction of the old city that the Council approved between 1887 and 1889. Its architect was Ángel José Baixeras, whose intervention enabled the implementation of the reconstruction of the old city owing to the implementation of the new law of forced expropriation for public use that was approved in Spain in 1879. Indeed, the Cerdà plan had already envisaged the opening of roads that affected the historic urban layout, although the opposition of owners and shop owners and a fairly inappropriate legal framework had not allowed the undertaking of some of the aspects of the urban intervention that arose from engineer Cerdà’s project.

A profound reconstruction of the historic sector. The Baixeras Plan was based on the three refurbishment paths envisaged by Cerdà (nº 598) but went far further in its proposal to merge a new structure with the old city. Firstly, as shown on the plan, it introduces the expropriation of the lateral edges of the newly created streets, with a greater impact on the existing layout. Secondly, it not only affected the new streets to be opened but also wide areas of the city in order to make streets and buildings, that at that time were not considered to have historic or artistic worth, disappear. Consequently, it replaced typically medieval streets for straight streets with corner houses for the model of the expansion.

The treatment of the monuments. The Baixeras plan envisaged a real remodelling, a radical transformation in the current district of Ciutat Vella with an urban planning criterion of resolving the issues of the existing road network. But it was combined with another no less relevant criterion, that of monumentalising by assessing first class historical buildings such as the Cathedral, Pi Church or Sant Pau del Camp, that is to say, the monuments considered architectural and artistic heritage during the 19th century, with a type of urban operation based on the remodelling of the city of Paris. The demolition of buildings surrounding these monuments was planned in order to create open spaces and gardens to create favourable viewpoints for their contemplation. The Baixeras Plan, never carried out in its entirety, had to wait until the first decade of the 20th century to see the opening of Via Laietana.