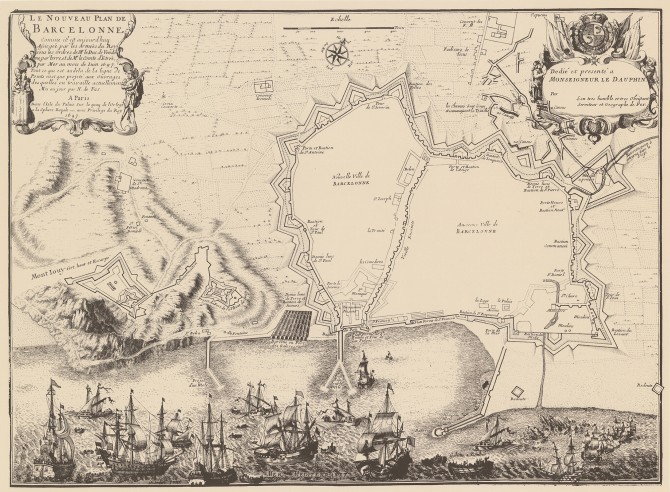 Barcelona, military goal. Barcelona had become a relevant military object in the difficult balance of forces of European powers in modern times. Consequently, the cartography of the city during the 17th century is linked to the military interest, either to obtain knowledge of the territory and its defences or to spread news of the battles that took place. In the latter case, the cartography became markedly propagandistic. The 1697 siege of Barcelona by Louis XIV during the Nine Years’ War was one of those episodes the deserved the attention of the cartographers that praised the glories of the French crown. This engraving is a sample of that, with a dedication to the Dauphin.

Improvements in the representation of the city. Nicolas de Fer had published a plan of the city of Barcelona in his work Les forces de l’Europe (cfr. N. 69) ( European Powers). That offers a new, much more careful version of Barcelona, with the title » a new plan of the city». The area of the beach and the port already shows how it was at that time, and the perimeter of the wall of the city, although not of the correct dimensions, does not present the evident distortions of the 1695 plan. Inside only the wall of the Rambla and some special buildings appear, but the road networks are not drawn. The engraving contains some elements that do not correspond to reality, such as the project of the dock in front of the dockyards and other dockyards outside of the walls.

Details of the siege. Regarding the military episode of the engraving, the artist shows the attack trenches on the northern side of the city between the Nou Gate – that was being refortified – and the Jonqueres Gate. That was the point that was most punished by the ground attacks directed by the Duke of Vendôme, which concentrated on that area to bring down the city. Various boats from the French navy, commanded by Víctor-Marie d’Estrées, are shown actively participating in the bombing of the city. The siege did not last long: from June 5th to August 10th 1697, the date on which the city capitulated.