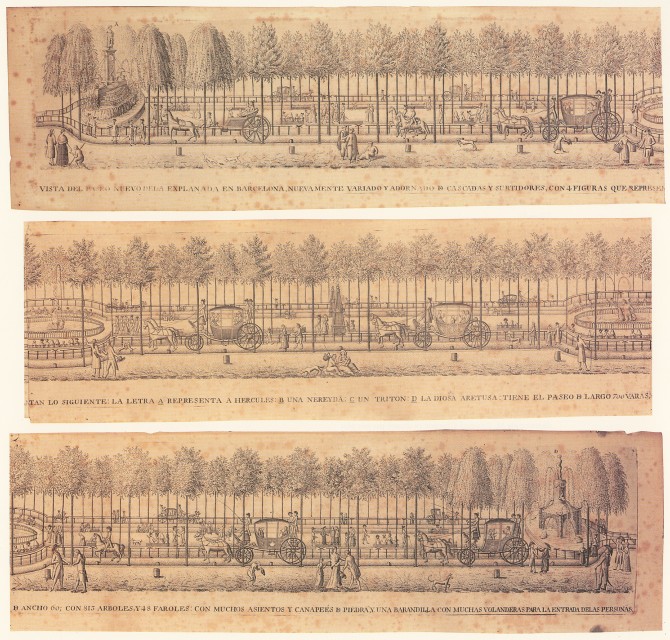 A French style boulevard in Barcelona. The Paseo de San Juan, also known by the name of Paseo de la Explanada since it is situated in the area that was left free by military order of buildings between the city and the military Citadel. The land was obtained by pulling down an important part of the district of Ribera, next to the Plaza del Borne, which had been the most dynamic economic centre of the city since medieval times.

The urbanisation of the boulevard was an initiative of the capitain Agustín de Lancaster in 1797, faced by an urgent need to create work in a moment of crisis and social unrest. It was the first boulevard created in Barcelona in a peripheral situation and was followed by others outside the walls of the city. Its planning was based on a straight line prepared for wheeled vehicles and pedestrians in which the line of trees is the main element complimented by roundabouts along its entire length and the placement of fountains, sculptures, benches etc. The urban model adopted is clearly French, within a tradition forged in the planning of the avenues of the palace gardens that were later applied to the royal roads when they reached towns and to the urban avenues. An enlightened urban planning with neoclassic tastes that attempted to improve the sanitary conditions of cities whilst beautifying them.

The view of the Paseo de la Explanada that we have here was created to commemorate its opening. The length of the engraving reflects the measurements of the promenade, 550 metres long and 47 metres wide. It was formed by 7 rows of trees, 813 specimens and as explained in the inscription at the bottom, it was decorated with cascades and water dispensers, stone benches and 48 lamp posts.

The Paseo was highly successful as a place for public recreation until its disappearance owing to the demolition of the Citadela and the later construction of the Park of the same name in the decade of the 1870s.