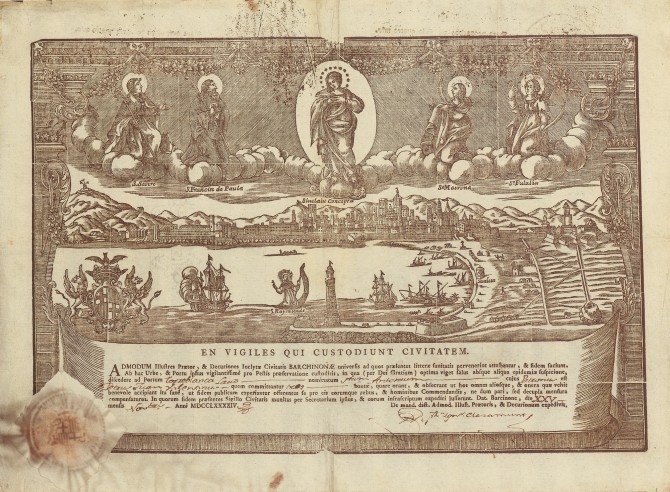 Bills of health. The propagation of widespread epidemics such as plague, cholera or yellow fever is often produced by entry into ports of ships with crews affected by these diseases. Port authorities attempt to prevent the entrance of boats suspected of being infected. That is why in the 17th century bills of health appeared to certify the good health of the crew and the absence of epidemics in the city that they had sailed from. Originally, a consul from the city or country the vessel was sailing to should also have signed the bill of health in order to guarantee its authenticity.

This bill of health of this print is dated 1794 and was issued in Barcelona for the boat San Antonio, captained by Pedro Juan Valentín, who was navigating towards Torreblanca with a crew of 3 sailors. In the written text – in Latin – reference is made to the lack of epidemics in Barcelona, specifically mentioning the plague, to guarantee that the boat which was going towards Torreblanca was not carrying any contagious illness.

Iconography of the bills of health. The majority of the 18th century bills of health were printed. It was normal for an image of the port of the city issuing it or that of a patron saint to appear, accompanied by the text that certified the lack of epidemics in the city and the health of the crew. The written text had gaps to fill in as in a form and the city’s coat of arms was always included.

This printed bill of health shows us a stereotyped view with little detail of the city’s sea front and the port in the foreground. Although the neighbourhood of Barceloneta had already been built, it is not shown in the engraving that still shows some fisherman huts. On the other hand, the health office where the bills of health were issued is shown, the only building identified with an inscription in the entire engraving.

The image of the Immaculate Conception dominates the drawing, flanked by Saint Sever ( a bishop and martyr from Barcelona) and Saint Francesc de Paula ( patron saint of Italian sailors ) on the left and Santa Matrona and Santa Eulalia ( patron saint of the city ) on the right. To these patron saints – highly revered and linked to the city – was also added the image of Sant Raimond de Penyafort, who appears arriving in the Port of Barcelona navigating on his cape, representing the gesture of his legend.