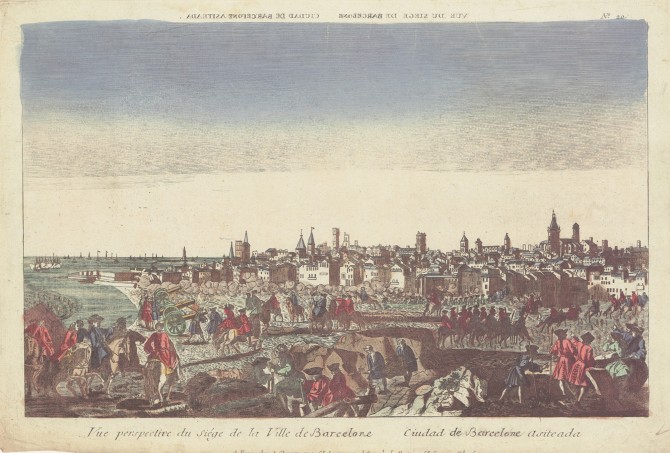 Optical views. Half way through the 18th century, the desire to discover new countries and cities lead to the proliferation of illustrated publications in the form of travel albums and the production of optical views. These were coloured engravings that represented preferably urban landscapes visualised through an optical box. The spectator has a view of the image through a hole with a lens that while limiting the field of view of the observed scene gave a feeling of naturalist precision and clear perspectives. That way the emotion of the trip was created without having to move from the spot. The success of optic views spread throughout Europe and what started out as a roving fair attraction over time became a family attraction as demonstrated by the optic views edited in Barcelona during the 19 th century. (nº 539 ).

The popularisation of the siege of Barcelona. The series of engravings of the siege and fall of Barcelona in 1714 by the engraver Jacques Rigaud was used as a resource to produce optic views ( nº 177-182). The representation of the war and the visual attractiveness for the viewer of the recreation of a siege scene and attack of a city were also interesting. However, in this case, the upper title identifies that the view is of the taking of Barcelona in reverse so that the correct view can be seen through the lens of the optic box. More specifically, it is the view of the fourth engraving of the Rigaud series (mº 177) that has stuck to the original, although the drawing has been simplified and also inverted. The colouring of the image stands out, shared with all the optic views produced at that time.

The diversity of the attributions of the siege of Barcelona. The 1714 series of engravings was attributed to other wars and cities during the second half of the 18th century. At the foot of the engraving it indicates that the taking of Barcelona was carried out by the French troops commanded by the Count of Harcourt. The quote that we are supposed to believe refers to Henry of Lorraine, who was Viceroy of Catalonia during the Reapers’ War between 1645 and 1647, is surprising. The mix up then of war facts is obvious and in line with the popular and not at all rigorous nature of the optic views.