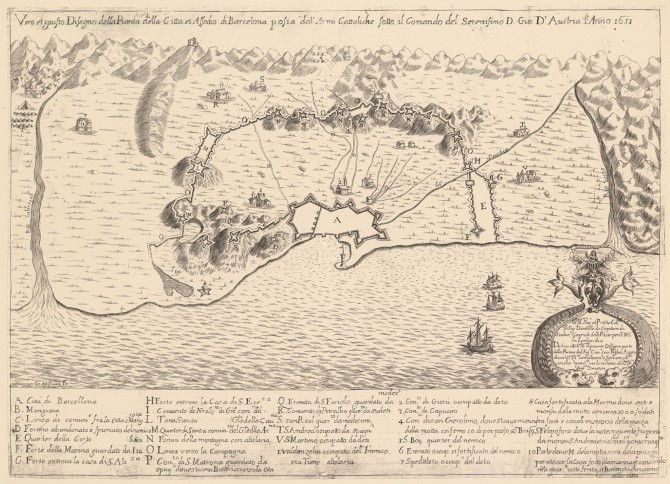 The first moments of the 1651-52 Siege of Barcelona. The siege of Barcelona by the troops of Philip IV during the Guerra dels Segadors (Reapers’ War ) started in July 1651. The drawing of Giovanni Antonio Franco engraved in Milan that same year shows the siege’s initial moments. The Hispanic troops crossed the Llobregat river and set up their first barracks in Sants. They then encircled the city to the point of closing it on the Levante side, in the low part of Sant Martí de Provençals, where the general headquarters were established, fortified and defended by Spanish regiments sheltering Juan José of Austria. The inscription of the engraving – situated at the bottom – enables perfect identification of these landmarks as well as some others referring to the Franco Catalonian positions. Strategic points such as the convent of Valldonzella y de San Gerónimo, or the encampment Sant Boi, where the French second-in-command Philippe de La Motte arrived, stand out.

Ideographic drawing. The image, a bird’s eye view of the Barcelona plain, where the siege takes place, is not precise at all and does not claim to be. The geographical features, such as the hills of Collserola, are drawn out of a scale as are the forts built for the siege and the convents outside the walls. Furthermore, the city, of which only the outline of the walls is shown, is stretched out, unlike in reality. This is considered to be one of the first representations of the plain of Barcelona.

Military cartography as propaganda. The military conflicts of the second half of the 17th century promoted military cartography. Aside from the interest of having more or less precise cartography useful for military action, often the representations of these military acts had a markedly propagandistic tone. That explains the inscriptions and praise for the personalities, such as those cited in this case for the catholic army captained by his Excellency Don John of Austria.