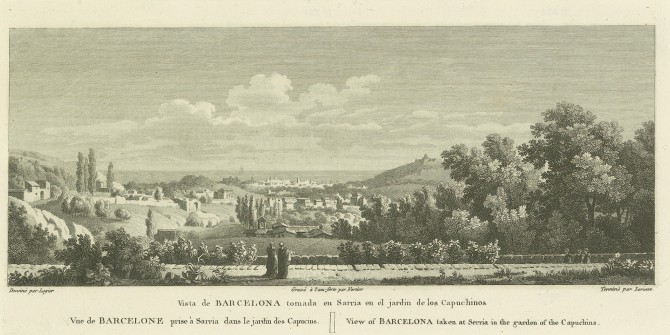 Barcelona from Sarriá. Complementary to the previous interior views of the city, especially of the view from Montjuïc; Laborde’s work provides a very particular viewpoint that, while coinciding with that of some images from previous centuries taken from the first foothills of Collserola, has nothing in common with those generated by the sieges and military attacks. The draughtsmen who accompanied Laborde newly focused on a scenic and consequently favourable treatment of the urban vision, emphasising the natural and rural values of the town of Sarriá in the foreground and a background where Barcelona is faded out but in which the mountain of Montjuïc stands out.

As indicated by the title of the engraving, the representation is viewed from the convent of the Capuchins of Sarriá, which in 1578 founded the order’s building in a place known as the “Desert”, where a chapel was built for the adoration of Santa Eulalia. It was the first capuchin convent on the Iberian peninsular. During the siege of 1714 the convent was occupied in a military fashion by the bourbon troops, although, apparently, the religious life continued, until in fact the expropriation in 1835, when it was suppressed and the “Desert” was converted into a charity which over time was renamed Institute of Former Workers. Behind the Desert School of the current Sarria, the former remains of the old capuchin convent can still be seen.